Siesta (シエスタ Shiesuta, Pronunciation: /sɪɛstə/) is a sweet maid working at the magic academy. She is a bit timid and doesn’t have much to say because she is a peasant. She is treated as a thing to do anything and to be any body's servant. She is to obey anybody above her station. She has a crush on Saito, and she also said that it was Saito who inspires her to move forward, because he believes that one must stand up and never give up just because something is difficult.

She is 1/8 Japanese since her great-grandfather came through the same sort of portal that Saito came through during the second world war. Siesta is a descendant of a Japanese Naval Ensign and pilot of a Mitsubishi A6M Zero from World War II named Sasaki Takeo. Siesta is the eldest of eight children, her hometown is Tarbes. In the anime, Colbert found the plane in a big hanger. At the hanger there is the headstone of the grandfather of Siesta. Saito can read the writing on the stone. In the novel Siesta father had the plane in town or on his land as a shrine.

Siesta is the eldest of eight siblings. One of her brothers is Julien.

In the anime, Siesta kissed Saito after being saved by the latter from Count Mott, a palace messenger, from being his maid, having heard that some nobles who appoints a young maid by name usually means that maid is to be his mistress. After said incident, her feelings for Saito grew even more.

She sees how Louise treats Saito, and wants to help him. She cares for him even though she can see a relationship between Saito and Louise. As the story progresses, she tries to win him by trying different things like going to places where Saito is. She is also seen wearing some costumes. When Louise punishes Saito for something he did by not feeding him, she brings food from the kitchen or takes him down to the kitchen where he gets some of the leftovers from the nobles.

At first, Siesta enjoys Saito's company as a friend. Later on, as the series progress, she decides to give up on him, after seeing Saito and Louise's relationship developing, only to end in more trouble, deciding not to give up, because she knows she has at least one advantage over Louise. 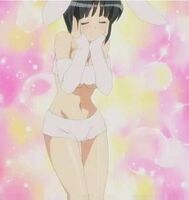 What Saito only sees of the outfit.

Louise ripped off the top trying to grab Siesta.

Siesta sees what all the commotion is about.

She goes from an ecchi 4-5 to an 8 when Louise ripped off the top part of the Siesta's bunny costume. 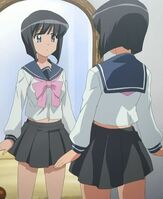 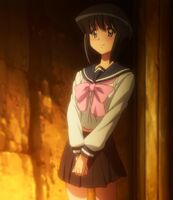 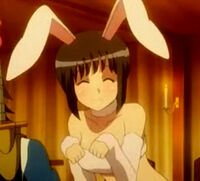 Siesta in some cosplay outfits. 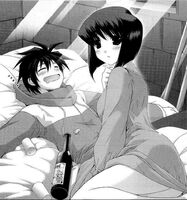 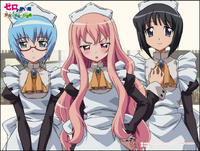 Retrieved from "https://zeronotsukaima.fandom.com/wiki/Siesta?oldid=21621"
Community content is available under CC-BY-SA unless otherwise noted.